The Meaning and History of Thanksgiving

Hi, I wanted to take a few minutes to wish you a happy day of giving thanks and to remind you to take time this year around your family and/or friends to remind each other of all the gifts we have been given. If you wonder what Thanksgiving was originally meant to stand for or just need a reminder, read the proclamation below by the then Governor Of Massachusetts, founding father and patriot, Samuel Adams;

A Proclamation For A Day Of Public Thanksgiving. 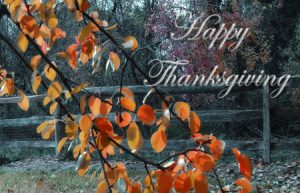 “Whereas it has pleased God, the Father of all Mercies, to bestow upon us innumerable unmerited favours in the course of the year past; it highly becomes us duly to recollect his goodness, and in a public and solemn manner to express the greatful feelings of our hearts :
I have therefore thought fit, with the advice and consent of the Council, to appoint Thursday the 15th day of December next, to be observed as a Day of Public Thanksgiving and Praise to our Divine Benefactor throughout this Commonwealth—Calling upon the Ministers of the Gospel, with their respective Congregations, and the whole body of the People, religiously to observe the said Day by celebrating the Praises of that all-gracious Being, of whose Bounty we have experienced so large a share.
He hath prevented Epidemical Diseases from spreading, and afforded us a general state of Health. He hath regarded our Pastures and Fields with an Eye of the most indulgent Parent, and rewarded the Industry of our Husbandmen with a plentiful Harvest.
Notwithstanding the unreasonable obstructions to our trade on the seas, it has generally been prosperous and our fisheries successful.
Our civil Constitutions of Government, formed by ourselves, and administered by Men of our own free Election, are by His Grace continued to us. And we still enjoy” the inestimable Blessings of the Gospel and right of worshipping God according to His own Institutions and the honest dictates of our Consciences.
And, together with our thanksgiving, earnest Supplication to God is hereby recommended for the forgiveness of our Sins which have rendered us unworthy of the least of his Mercies ; and that by the sanctifying influence of his Spirit, our hearts and manners may be corrected, and we become a reformed and happy People—That he would direct and prosper the Administration of the Government of the United States, and of this and the other States in the Union. That he would still afford his Blessings on our Trade, Agriculture, Fisheries and all the labours of our hands. That he would smile upon our University, and all Seminaries of Learning—That Tyranny and Usurpation may everywhere come to an end—That the Nations who are contending for true liberty may still be succeeded by his Almighty aid—That every Nation and Society of Men may be inspired with the knowledge and feeling of their natural and just rights, and enabled to form such systems of Civil Government as shall be fully adopted to promote and establish their Social Security and Happiness—And, finally, that in the course of God’s Holy Providence, the great Family of Mankind may bow to the sceptre of the Prince of Peace so that mutual Friendship and Harmony may universally prevail.
And I do recommend to the People of this Commonwealth to abstain from all such Labours and Recreations as may not be consistent with the Solemnity of the said Day.
Given at the Council Chamber in Boston, this sixth day of October, in the year of our Lord, one Thousand seven Hundred and Ninety-six, and in the twenty-first Year of the Independence of the United States of America.”
Samuel Adams.
Attest: John Avery, Secry
God save the Commonwealth of Massachusetts !
TO THE LEGISLATURE OF MASSACHUSETTS. NOVEMBER 17,1796.

Also read more as stated by president George Washington in 1789 about Thanksgiving and its original intention as a holiday:

“Whereas it is the duty of all nations to acknowledge the providence of Almighty God, to obey His will, to be grateful for His benefits, and humbly to implore His protection and favor; and

Whereas both Houses of Congress have, by their joint committee, requested me “to recommend to the people of the United States a day of public thanksgiving and prayer, to be observed by acknowledging with grateful hearts the many and signal favors of Almighty God, especially by affording them an opportunity peaceably to establish a form of government for their safety and happiness”:

Now, therefore, I do recommend and assign Thursday, the 26th day of November next, to be devoted by the people of these States to the service of that great and glorious Being who is the Beneficent Author of all the good that was, that is, or that will be; that we may then all unite in rendering unto Him our sincere and humble thanks for His kind care and protection of the people of this country previous to their becoming a nation; for the signal and manifold mercies and the favorable interpositions of His providence in the course and conclusion of the late war; for the great degree of tranquillity, union, and plenty which we have since enjoyed; for the peaceable and rational manner in which we have enabled to establish constitutions of government for our safety and happiness, and particularly the national one now lately instituted; for the civil and religious liberty with which we are blessed, and the means we have of acquiring and diffusing useful knowledge; and, in general, for the great and various favors which He has been pleased to confer upon us.

And also that we may then unite in most humbly offering our prayers and supplications to the great Lord and Ruler of Nations, and beseech Him to pardon our national and other transgressions; to enable us all, whether in public or private stations, to perform our several and relative duties properly and punctually; to render our national government a blessing to all the people by constantly being a government of wise, just, and constitutional laws, discreetly and faithfully executed and obeyed; to protect and guide all sovereigns and nations (especially such as have shown kindness to us), and to bless them with good governments, peace, and concord; to promote the knowledge and practice of true religion and virtue, and the increase of science among them and us; and, generally, to grant unto all mankind such a degree of temporal prosperity as He alone knows to be best.

Given under my hand, at the city of New York,

From all of us here at In-Lawsuite.com, Have a wonderful and blessed Thanksgiving!

Our Favorite Quotations About Grandchildren