Our Favorite Quotations About Grandchildren

We have put together a collection of quotations about grandchildren that are funny, heartwarming, and sometimes full of wisdom. We wanted to share them with you our readers in hopes that they would brighten your day, bring you warm memories, and even bring a tear to your eye. Enjoy!

Posterity is the patriotic name for grandchildren. – Art Linkletter

Grandparents, like heroes, are as necessary to a child’s growth as vitamins. – Joyce Allston

Grandchildren: the only people who can get more out of you than the IRS. – Gene Perret

Few things are more delightful than grandchildren fighting over your lap. – Doug Larson

Grandchildren are the dots that connect the lines from generation to generation. – Lois Wyse

Grandparents should play the same role in the family as an elder statesman can in the government of a country. They have the experience and knowledge that comes from surviving a great many years of life’s battles and the wisdom, hopefully, to recognise how their grandchildren can benefit from this. – Geoff Dench 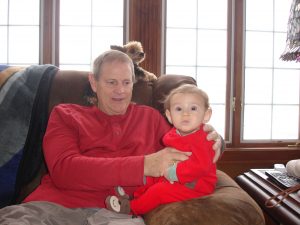 The presence of a grandparent confirms that parents were, indeed, little once, too, and that people who are little can grow to be big, can become parents, and one day even have grandchildren of their own. So often we think of grandparents as belonging to the past; but in this important way, grandparents, for young children, belong to the future. – Fred Rogers

The very fact that you don’t look or act or feel like the grandparents of even a generation ago does not mean that you are less, but that you are more—in effect, an evolved form of grandparents, primed to do a bigger and more challenging job than any group before you. – Arthur Kornhaber

Something magical happens when parents turns into grandparents. Their attitude changes from “money-doesn’t-grow-on-trees” to spending it like it does.? – Paul Linden

Unconditional positive regard is rarely given by anyone except a grandparent. – author unknown

The simplest toy, one which even the youngest child can operate, is called a grandparent. – Sam Levenson

Everyone needs to have access both to grandparents and grandchildren in order to be a full human being. – Margaret Mead

The feeling of grandparents for their grandchildren can be expressed this way: “Our children are dear to us; but when we have grandchildren, they seem to be more dear than our children were. – Henry Old Coyote

Grandparents who want to be truly helpful will do well to keep their mouths shut and their opinions to themselves until these are requested. – T Berry Brazelton

My grandkids believe I’m the oldest thing in the world. And after two or three hours with them, I believe it, too. – Gene Perret

Do you know why grandchildren are always so full of energy? They suck it out of their grandparents. – Gene Perret

Grandchildren are God’s way of compensating us for growing old. – Mary H. Waldrip

An hour with your grandchildren can make you feel young again. Anything longer than that, and you start to age quickly. – Gene Perret

Perfect love sometimes does not come until the first grandchild. – Welsh Proverb

Why do grandparents and grandchildren get along so well? The mother. – Claudette Colbert

A zest for life is one of the most important examples a grandparent can pass on to their grandchildren. – author unknown

I love this child. Red-haired—patient and gentle like her mother—fey and funny like her father. When she giggles I can hear him when he and I were young. I am part of this child. It may be only because we share genes and that therefore smell familiar to each other. . . . It may be that a part of me lives in her in some important way. . . . But for now, it’s jelly beans and “Old MacDonald” that unite us. – Robert Fulghum

Grandchildren give us a second chance to do things better because they bring out the best in us. – author unknown

Although you’ve raised children of your own, now you don’t have to worry about all the responsibilities that come with parenting. You’ve earned the right to enjoy being a grandparent. – author unknown

Didn’t we, like our grandchildren, begin with a childhood we thought would never end? Now, all of a sudden, I’m older than my parents were when I thought they were old. – Lois Wyse

I wish I had the energy that my grandchildren have – if only for self-defense. – Gene Perret

Blessed be the ties that bind generations. – author unknown

The Meaning and History of Thanksgiving